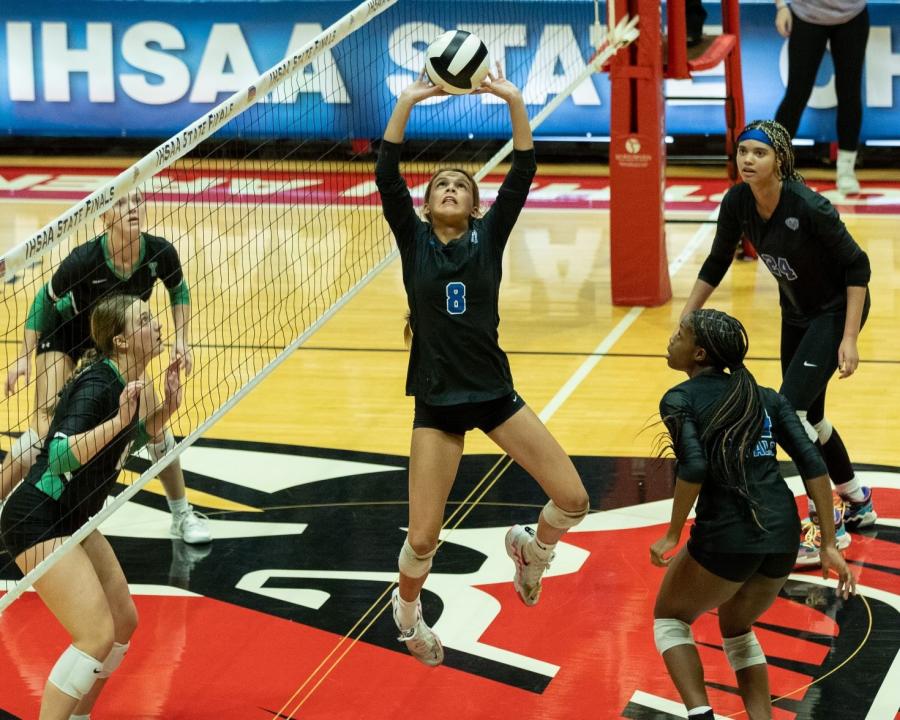 No. 1 Hamilton Southeastern tops No. 2 Yorktown for First State Championship

In the first matchup of the No. 1 vs. No. 2 ranked teams in the final season poll since 2016, the Royals awoke from a mid-match slumber to take control of the last set and a half to claim their first-ever state championship. Coach Jason Young’s squad finished as runner-up in 2019.

The Royals claimed the title after losing their first match of the season, then running off 34 straight wins – losing only six sets in the process.

Hamilton Southeastern handled game one easily, only to see No. 2 Yorktown (34-3) come back with a dominating win in set two. The Tigers of coach Stephanie Bloom then ran out to leads of 10-5 and 15-8 in set three before HSE put its game back together.

The Royals caught Yorktown at 17-17, then broke from a 23-23 tie on kills by Lindsey Mangelson and Avery Hobson (on match point) to take a 2-1 lead. In the fourth set, HSE took an 11-10 lead on a Lauren Harden kill and never trailed again. Hobson’s kill on match point sealed the victory.

Hobson, the only senior on the HSE roster, led all hitters with 17 kills, while Charlotte Vinson led Yorktown with 15 kills.

Avery maintains a 3.7 grade point average and was selected to the Academic All-State team.

During her volleyball career, Hobson has garnered All-State recognition, while also playing on the 4A Jr. North South All-Star Team in 2021. She is a two-time All-Conference and All-County honoree.

She is the daughter of Todd and Suzanna Hobson of Fishers, IN and is headed to Duquesne University in Pittsburgh to study Business and play volleyball for the Dukes.