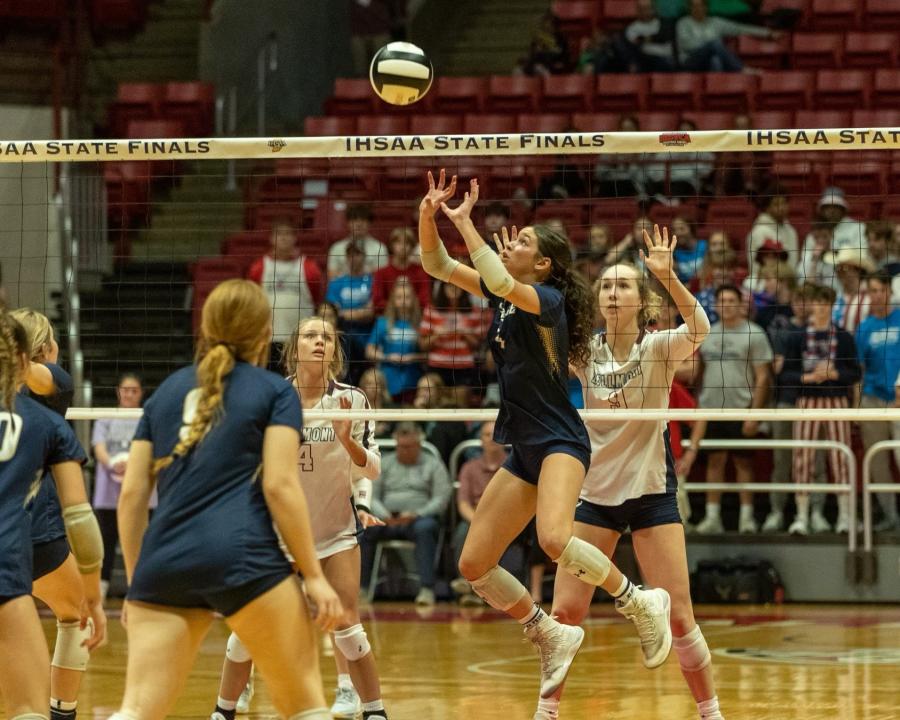 Providence started quickly and appeared headed for a straight-set win after building up a six-point lead in set three only to see Bellmont fight back, then take a nice lead in set four. However, despite being down 9-4 in set four, coach Terri Purichia’s Pioneers revived themselves and rallied for a nine-point win to claim the championship.

Sophomore Abby Julius led the hitting parade for the winners as she recorded 15 kills, while teammates Lilly Kaiser and Makenzie Wagner each had 14 and Lilly Tappel chipped in with 12. Tappel also had a match-high 23 digs.

Fourth-ranked Bellmont (30-7) got 15 kills from Hailey Cole and 13 from Delaney Lawson.

Following the match, Grace Purichia of Providence High School was announced as the recipient of the Mental Attitude Award by the IHSAA Executive Committee.

In the classroom, Grace owns a 4.2 GPA, is a member of the National Honor Society, Yearbook Staff, and Spanish Club.

Awarded the Best & Brightest Award her senior year from the American Volleyball Coaches Association, Grace is a four-year varsity starter, was selected as the News and Tribune Player of the Year for the 2021 season and was named PHS Female Athlete of the Year in 2021. Grace also takes time out of her busy schedule to volunteer at St. Elizabeth Home, Holy Family Parish, and with In Heaven’s Eye, recording 125 hours of service.

She is the daughter of Terri and Jeff Purichia of New Albany, IN and will attend Jacksonville State University on a full ride volleyball scholarship where she plans to study business with a concentration in marketing.

Indiana Farm Bureau Insurance, a corporate partner of the IHSAA, presented a $1,000 scholarship to Providence High School’s general scholarship fund in the name of Grace Purichia.